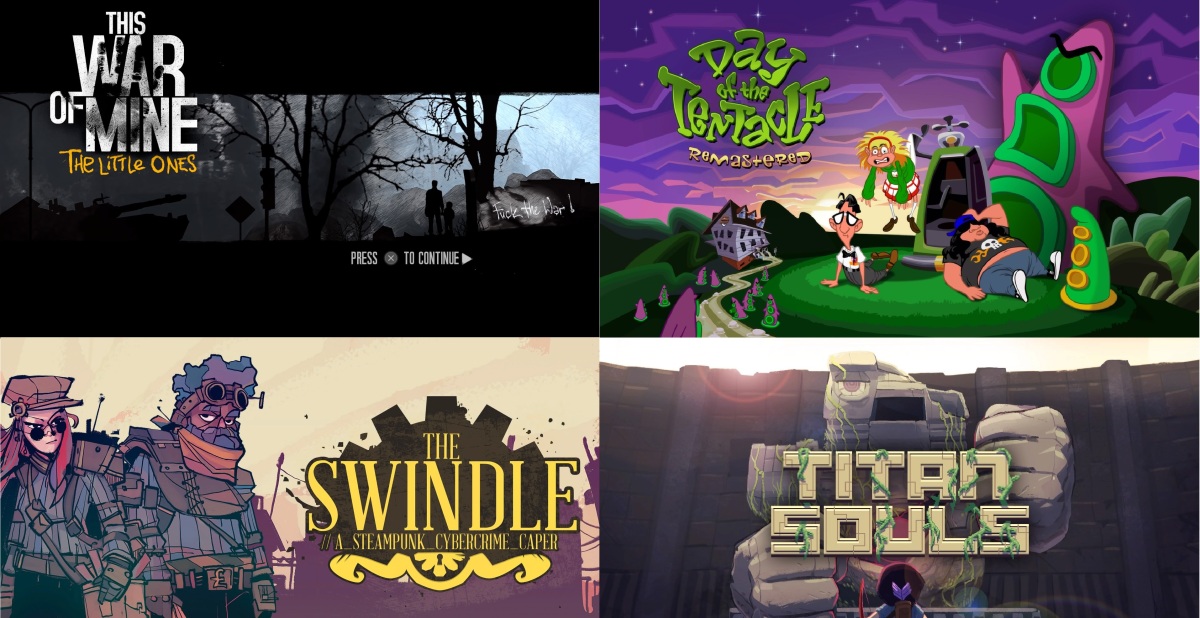 Reminder – If you are a PS Plus member, remember to add the games to your library each month, you don’t HAVE to download them. Even if you don’t think you’ll ever play it, it is worth having in your library just in case. You never know what is going to take you by surprise!

On my quest to play all sorts of different games, I have decided it would be fun to go back and play through my library of PS Plus games that I have never even looked at. I am (eventually) going to go through each month, from most to least recent, trying out these games and having my say about each one. I do hope this can be helpful to someone but if not, at least I’m finally trying these games!

P.S. I am only going to go through the PS4 games for now. Between my huge backlog and my slow old console, I’ve decided that will be best. Since I am not yet playing the PS3/Vita titles, I am going to write a quick summary from the info I find from my friend Google, just for my own future benefit/anyone curious about the full months line-up!

PS4 – This War of Mine: The Little Ones

This War of Mine: The Little Ones is a side-scrolling, survival, base-building game, developed by 11 Bit Studios. There is a civil war going on and you control a group of survivors. By day you can craft in your base to provide the bare necessities of survival, then by night you choose who sleeps, who guards, and who goes out to scavenge. I had already heard of the game, and the whole survival and base building concept piqued my interest. One of the reasons that I have never bought it though is because it puts me off, the thought of putting hours into the game then having everyone die because I’m crap at resource management.

Upon beginning my game, I was surprised by how much I felt it had to offer. The not only are the graphics unique and ambient, the whole atmosphere of the game is one of desperation, sadness and gloom. They really hit that nail on the head. Trouble is, it’s borderline depressing. I know I am going to have to be in the right mood to play this game. That is still a good thing though, I feel it is important to sometimes open ourselves up to these things, and as shit as it is to see our characters starving and sick, when we see them healing and content, it is a nice feeling. I know the characters aren’t real and they don’t have much personality to get attached too, but it’s more what they represent to me. And we could all do with learning the lesson of ‘Appreciate the little things’.

Now, as far as game play, the game really really could have used a tutorial. It took me a google search to figure out how to use the stairs, then I accidentally sent a trader away while trying to talk to him. I have done a trial play-through and one of my characters died, but she got killed so quickly that I still have no idea how the combat works. I stopped after that because my other characters were starving and I wanted to start afresh now that I have a better idea of how to approach resource management. If any of this sounds appealing to you or if you are in the mood for something heavy, or something even potentially eye opening, then I suggest checking it out. I haven’t even scratched the surface yet and I will be restarting to make better choices next time.

The Swindle is a stealth 2D platformer developed by Size Five Games. It also has a very minor resource management/skill tree element to it in which you will need to make decisions, so I would say it also falls into the category of strategy. It is set in London in the 1800’s. The concept is simple. You are a master burglar. Scotland are going to release an AI that will thwart your career and you have 100 days to stop them.

Each day takes the form of a new heist, whether you are successful or not is another matter. While performing the heist, if you get seen once then that alerts everyone. Then the second time you are caught. You can also die from falling from great heights or landing on spikes. You will then get a new burglar to take over. The aim of the heists is to earn as much money as possible. You can then return to your ship and buy upgrades, whether they are tools, abilities or security passes for more upmarket areas, providing higher rewards and higher risks. It is up to you how you spend your earnings and your 100 days. This isn’t a great game for me as I don’t enjoy stealth and I don’t enjoy 2D platformers, but I really do love the concept. I played 8 days and I think I earned around £2000, but then I came off it as I don’t really have the patience. I do think this is an enjoyable little game, especially, I imagine, for Vita. One thing I will say is that I could have used a tutorial since it gets a little annoying having to pause and find the controls.

PS4/Vita – Day of the Tentacle Remastered

Day of the Tentacle Remastered is a point and click adventure developed by Lucas Arts. Purple Tentacle is on the path to world domination and it is up to us to stop him. DotT is considered to be a classic in the genre and I personally had fun with it as my first console point and click. The whole style is fun, from the music, to the humour, to the artwork. There is actually the option to play the original version rather than the remaster, all you have to do is press a button. There is also the full version of DotT’s predecessor, Maniac Mansion, available to play in game.

For anyone that doesn’t know, the idea is to explore and collect items to solve puzzles. That sounds easy but I have got to admit, I ended up using a walk-through. I did everything I could think of but some in some cases I just could not figure it out. Every time I used the walk-through I was pleased I did because I would never have thought of the answer, so don’t worry if you do need to use it. But don’t use the walk-through from the get go. I was surprised at just how far I got without it. This isn’t a long game – I suppose it just depends how long it takes you to figure everything out – but I do recommend only starting it when you intend to commit to it. I did the intro then left it for a couple of weeks. When I came back to it I had forgotten what to do, I was only pleased I was at the beginning because it would suck to forget where you were half way through. I would think most people can finish this in 2-3 sittings, including the platinum, which is pretty easy (I got my 8th platinum, woohoo!). FYI if you are going for the platinum, don’t skip the cut-scenes. I think I would have loved the game a lot more if it wasn’t for one running joke, which – as much as I hate to be a party pooper – left a bad taste for me. But other than that, I enjoyed it and I am really looking forward to dabbling more into the genre.

Titan Souls is what I would like to call a top-down boss fighter game.. developed by Acid Nerve. With only the ability to roll, run and shoot an arrow, rooms of bosses await. I can tell you straight away that this game was not made with people like me in mind. My favourite part of a game is the story, and my least favourite is..  can you guess? The boss fights. So I think I am the opposite of the target audience. I don’t enjoy getting constantly one shotted and I don’t enjoy constantly missing my target

Having said that, I think the style of this game is lovely and the music between bosses is beautiful. It’s not that the controls suck, but it sucks having one arrow then having to retrieve it every time you inevitably miss, while also being chased by whatever beast you are facing. But I do understand why it is that way. I managed to stick around for long enough to defeat my first boss and the feeling of little you, triumphing against the odds is a good feeling. But in order to get that you have to have the patience to keep going, and sadly, I am the opposite of patient. If you enjoy a challenge and enjoy games that are soley about boss battles then go for it, please. If I am not mistaken, this game prides itself on being difficult.

PS4/Vita – Azkend 2: The World Beneath

Azkend 2: The World Beneath is a match-3 game developed by 10tons Ltd. If you enjoy mobile games but without the microtransactions then you will probably enjoy this one. It’s pretty much like most other versions of these games, with different types of rounds, challenges and bonuses. As much as I thought I would want this on my console, I definitely think these games are better on the move, where you can jump in for 10 minutes if that’s all you have and finish a couple of rounds. On console however, it just feels a bit bland. The controls don’t seem to transfer well either, I think it would work a lot better with a touch screen or a mouse. This is just my opinion though. The artwork and music are both nice and if you easily get addicted to these games then you’ll enjoy it. It is certainly nice to get for free, but it is just a game I’d rather have on my phone that I could whack out when I am out somewhere and bored. It’s a time passer rather than a must play.

Blazerush is an arcade, racing game developed by Targem Games. Reviews range from average to good, saying that while it is very fun, it lacks substance.

Summary – Five games to try, again, wow! To be honest, I liked this bunch a WHOLE lot better than February’s selection. With this group, I have completed one game, have another one I would like to complete, another that I might complete and the other two were genres that I would have never bought but was pleased to try. Probably one of the most successful months that I have had so far! And I got my first PS Plus Platinum! It was a good month for Vita players too since four of these games are crossbuys!

Did you enjoy Januarys selection?